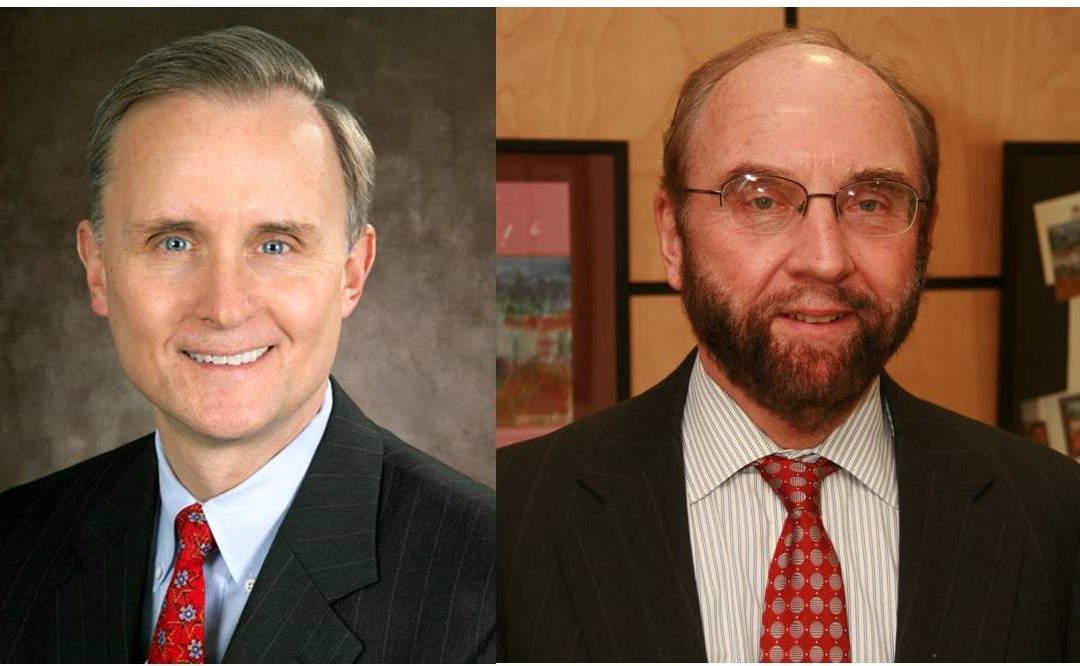 Welcome Brad and Robert (pictured left and right) to the Saratoga Bridges Board of Directors!

Saratoga Bridges has elected 2 new Members to our Board of Directors on February 11.  Brad Sexauer and Robert Barnett join a group of distinguished, dedicated individuals who are responsible for the following:

Brad Sexauer, a resident of Saratoga Springs, is the Vice President for Strategy and Market Development at Saratoga Hospital.  Brad has over 25 years experience in healthcare management for both not-for-profit and for-profit businesses.  Prior to joining the hospital in 2005, he was Vice President with Danville Regional Health System in Danville, VA and Corporate VP/Planning at Ingalls Memorial Hospital in suburban Chicago, IL.  Brad has a Masters of Business Administration from the University of South Dakota, a Masters of Health Administration from Tulane University and a BA in Zoology from DePauw University.  He is a Fellow of the American College of Healthcare Executives and a member of the Society for Healthcare Strategy & Market Development.  Brad is currently a member of the Board of Directors of the local affiliate of the American Heart Association, a member of the Rotary Club of Saratoga Springs, a Paul Harris Fellow of the Rotary International Foundation, on the Board of Directors of The Chamber of Southern Saratoga County and on the Board of Visitors of DePauw University.

He says, “In my 8 years living in Saratoga Springs. I have been impressed with Saratoga Bridges’ presence, profile and bond with and in the community.  The very good work that the organization does for individuals with developmental disabilities is often showcased locally.  When I initially started working as a volunteer consultant with their Strategic Planning Committee in 2006, I toured their facilities and was struck by the compassion and commitment exhibited by everyone I met. I’m excited about becoming part of this organization.

I joined the Saratoga Bridges Board primarily out of a deep respect for the organization’s mission in the region.  Like my employer, Saratoga Hospital, Saratoga Bridges has deep roots in the community and cares for some of the most vulnerable of our residents. I enjoy being involved in my community, and what better way to be involved than to be part of an organization that truly makes a difference?  My vision for Saratoga Bridges is to be a leader among ARC agencies and to become an even better service provider.”

Robert Barnett, a resident of Ballston Lake, retired in 2009 after more than 30 years working in a variety of positions for the New York State Department of Health (DOH).  Robert has expertise in public sector, executive-level, health care management and team leadership experience developing innovative solutions to improve health care quality, access and cost effectiveness.  He received numerous honors and awards including many Commissioners’ recognitions, Special Achievement Certificates and Outstanding Appreciation during his tenure at DOH.  Robert has retained his NYS Licensed Insurance Broker & Agent for Life, Accident & Health.  He has a BA in Economics from St. Lawrence University, a M.S.I.A. in Industrial Administration and Management from UnionCollege, a MA in Economics from The State University at Albany, completed course work toward a Ph.D. in Managerial Economics from Rensselaer Polytechnic Institute.  Robert volunteers for the Adirondack Mountain Club Saratoga and Cold River chapters.

He says, “I admire and respect greatly the holistic approach that Saratoga Bridges takes to the individuals it serves.  The organization clearly looks at the complete and personal needs of each person and then makes great efforts to ensure they are given every opportunity to live and function in their community at the highest level possible.

My vision for Saratoga Bridges is to assist in whatever way I can to develop outcome measures for improving the lives of people with disabilities and helping the organization transition to the “People First Waiver” program.  Additionally, recently, I read about a program that teaches people with disabilities skiing with perhaps the goal of competing in the Winter Empire State Games.  I would like to see what level of interest there may be for persons in the Saratoga Bridges program to learn how to ski and have skiing available as a recreational opportunity.

I joined the Saratoga Bridges Board because I realize how valuable their purpose to the community and that it needs volunteers to assist in fulfilling their mission.   Saratoga Bridges gave a great deal to my brother Ronald until his death in 2009 and to our family.  I would like to contribute back in whatever way I can.”