Saratoga Bridges raised close to $19,000 NET at our
24th Annual Travers Day at the Races

Greeting guests were Executive Director, Valerie Muratori and her family along with CFO Jane Mastaitis & her husband Steve, Human Resources Director John Herrick with Karen Lehan.  In attendance were Paul Robbins of DIAGEO & Dave Crossett along with 60 guests from Empire Merchants North and Diageo; Stephan von Schenk, Paul von Schenk and many family and friends of The Adirondack Trust Company — their 2013 Presenting Season Sponsor for fundraising events were also in attendance.  Other Season Sponsors were Tom Domery representing Coca-Cola; Bob McKenna representing New Country Toyota Scion of Saratoga with his wife Cathy; and AMRI, The Bonadio Group, Champlain Wealth Management and Olsen Associates Architects were represented.  Also in attendance were Blair & Phyllis Bynum with a table full of guests, Mike Bowker from NBT Bank, and representatives from Matthews Buses were all on hand to celebrate.  Others seen were The Honorable James Tedisco; John & Linda Ciulla & their guests; Saratoga Bridges Board Member Steve Rowland and his wife Chris; Maria & Harry Buccifero from Saratoga Living; and Robert Barnett, Saratoga Bridges Board Member, with his wife. Karin Hyman-Gentner, Saratoga Bridges Foundation Board Member was also in attendance with her husband Grant and her mother Nancy.  They shared a table with Joe Mastrianni and Wendy Wyczawski.  Wendy was the winner of a generous gift basket donated by The Pink Paddock. 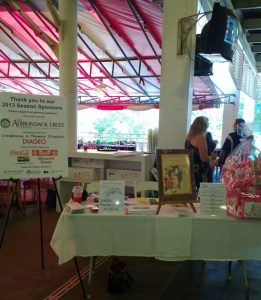 Saratoga Bridges is most grateful to the following 2013 Sponsors, for without their generosity the event would not be as successful: