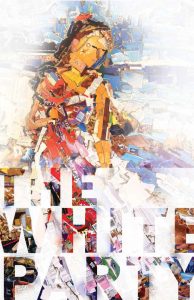 A record amount of $113,774 (NET) was raised at Saratoga Bridges Annual “White Party” Gala on Saturday, July 19th as Elizabeth Alexander & Heather Straughter, Gala Chairs and their committee greeted over 600 guests at the prestigious FASIG TIPTON.  Heather Bohm-Tallman Photography captured many memorable moments at our largest fundraiser and extended an offer of FREE downloads to guests at http://hbtphoto.pass.us/bridges-white-party-2014/i-ppV9y115056215

Heather Bohm-Tallman took the photo above (l to r) of
Co-Chairs Beth Alexander and Heather Straughter welcoming guests
to the 2014 White Party.

The LIVE Auction, held in the famed auction house, combined with the Silent Auction brought in close to $34,000 for our agency’s programs and services.

Sammy, The Bugler, started the Live Auction off with the sounds of summer in Saratoga before Chad Beatty, President of Saratoga Bridges Foundation Board and Beth Alexander & Heather Straughter, co-chairs of the event, started the bidding.  Here are some of the items and winning bids:

The auction ended with our Creative Endeavors artists, David, Adam, Mary and Shannon showing bidders the three pieces they donated.  The guests saw the confidence the artists have gained and just how important art has impacted their lives.  With an estimated value of $270, the winning bid was for $2,500 by Michele Riggi.  Visit Creative Endeavors Artists on the web at creativeendeavorsartists.com for more information on how this program is changing the lives of the individuals we serve.

We also raised an additional $11,176 in the silent auction and raffle. This year’s raffle included a “Basket of Cheers” filled with wines rated 90PLUS valued at $1,500 from Crush & Cask Wine & Spirits.  The winner was Pier Bruno.

Special thanks to our 2014 ‘White Party’ Gala Sponsors:

Our sincere appreciation to our 2014 Season Sponsors: