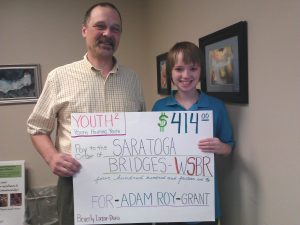 The check presentation (created by Adam) with Kurt Freeman, our Implementation and Information Specialist, and Adam Roy

Saratoga Bridges recently received a grant in the amount of $415 from Youth² – Youth Helping Youth Fund.  Written by Adam Roy, a vivacious, gifted, sharp, energetic and enthusiastic 12 year old young man with an Autism Spectrum Disorder, the funds will be used for WSBR, “The Voice of Saratoga Bridges” to enhance marketing efforts for WSBR‘s Youth Programming.

Under the guidance of The Community Foundation for the Greater Capital Region, Youth2 was created to engage young people to think about issues that they care about and to create volunteer or social action projects for youth and by youth.  They are committed to giving financial and thoughtful organizational support to help interested young people turn their ideas into realities.

After reading about our new radio station in the Saratoga Today newspaper last winter, Adam’s Mom contacted us to say he was interested in becoming a part of WSBR.  With a passion for radio, online broadcasting and the music industry, Adam had in fact created his own show at home.  His desire was to develop segments on themes for kids and teens on the Autism Spectrum.  As he is homeschooled, Adam is available during the day to participate and has been an active part of the WSBR crew since February.

Adam brings a youthful element to WSBR.  With that in mind, he wrote a grant, considered the necessary items, researched the costs online, developed a budget and made a presentation to express its purpose and importance to Youth² Advisory Board.  This is certainly to be commended as Adam definitely is a role model!  With that in mind, his grant will be utilized for Youth Programming for WSBR and allow us the opportunity to purchase marketing materials to promote the radio station to a younger audience.   Adam says, “When I go to the meetings, I see people doing incredible things they could never imagine.  I go because it’s one of the nicest groups of people I’ve met!  “It will give kids with special needs motivation by seeing that they can accomplish cool things too.  It will raise awareness and let people hear music and interview that are enjoyable and educational.”

Kurt Freeman, Saratoga Bridges Implementation and Information Specialist, read an article in an article in the NY Times in April of 2013 that featured Lifestyles for the Disabled, an organization similar to ours.  What Lifestyles has done is to allow people who do not exactly seem like naturals to become radio personalities.  They record brief talk show segments and post them online as podcasts. Kurt pitched the idea to our Administrators who jumped at this opportunity.  He then began to percolate how it would operate and recruited interested participants.  The result of his concept is the creation of WSBR – “The Voice of Saratoga Bridges”.

Since last year, there has been a lot of infectious excitement and energy.  The personalities meet twice a week to discuss program ideas and learn segment design, public speaking, interview planning, editing and other tech tools.  They record brief talk show segments and post as podcasts over the Internet on Live365.com on an ongoing 24-hour loop.  With varying abilities, they incorporate assistive technology to enable people who have limited speech, literacy issues or other barriers the chance to participate. WSBR is giving the participants a voice in the community.  They are becoming less marginalized and more active self-advocates.  Ultimately, we feel WSBR can dramatically enhance and transform their lives by supporting our mission of enhancing their dignity.  Some of the many benefits include being as productive and as independent as possible, developing self-respect, building confidence, improving self-esteem, learning tangible and practical skills, becoming another public face of the agency and acting as role models to their peers.

In July 1, 2003 Beverly Lazar Davis wrote a letter to friends and family asking for their support in creating a fund to support youth interested in being creative and doing good in their communities.  With $7,000 generated in lieu of 50th birthday gifts, Youth Squared was founded.  Since then, 23 grants have been given out in Saratoga County helping youth locally and all around the world.  Specifically, these young adults have gained skills in the areas of volunteer options, grant application and grant reviewing, proposal writing, website development, fundraising ideas, collecting community resource information, distribution of volunteer resources, public speaking, publicity ideas, inter-agency networking, reading financial statements and net assets, program evaluation and assessment, school social club opportunities, interviewing techniques, mailings, philanthropy, recognizing and celebrating youth who give, writing press releases and documentation of the impact of social action.