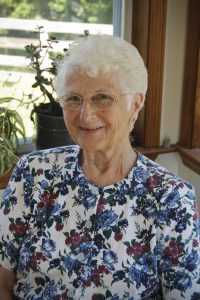 Marj’s relationship began with Saratoga Bridges in the late 1970’s when her son Timmy, a student at St. Mary’s School for the Deaf in Buffalo, needed a summer program. When he graduated in 1983, he began working in our Ballston Spa workshop. Marj and her husband Bill became friendly with other parents including several Board Members. When she was asked if she would be interested in being on the Board, she gladly accepted. Upon retiring from a full time position at Saratoga Hospital’s Lab in 1995, she had more flexibility and even more time to volunteer.

Over the years, Marj was a Vice President and Secretary on our Board of Directors. Living close by allowed her to be easily accessible to us. Marj was part of our Guardianship Program and Committee from the beginning – serving as Chair. She was extremely compassionate, dedicated and felt that Saratoga Bridges was part of her extended family despite her loss of Timmy so many years ago. Marj truly believed our role was to be extremely involved and available to people who did not have family members. She encouraged the committee to be very active in their lives by celebrating their accomplishments and birthdays and recommended friendly visits with individuals we were guardian for – whether going out for coffee, having lunch, calling or stopping by to say hello. Marj also served refreshments at our Great Pumpkin Challenge, encouraged people to become members of our agency and was a fervent advocate for more than 40 years.

Marj’s had a motto that she lived by — “If you give your time, energy and financial resources YOU in turn will be rewarded!” She always showed a personal commitment to our mission as well as to other human service agencies and religious institutions.  Many people were fortunate to share and receive her expertise, empathy, experience, kindness, enthusiasm and support as she proved to be a woman of her word through her actions. Her other volunteer affiliations included: 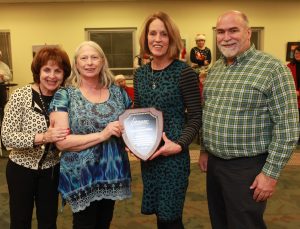 And yet, she was remarkably humble. Marj valued her close-knit family, Saratoga Bridges, a healthy lifestyle and strong sense of faith. These provided her with the foundation to be an invaluable role model in our community and were the factors that resulted in Marj being recognized as the 2012 Saratoga Springs Rotary Club Senior Citizen of the Year Award. 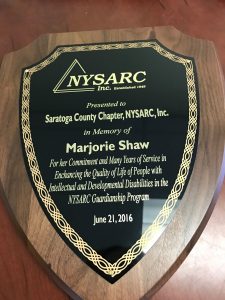 We were thrilled when we learned that Marj was the 2016 NYSARC Guardianship Recognition Professional Excellence Award! She was a bright light in our lives and is missed tremendously!   In closing, the worthy values Marj lived by, the good deeds she performed and the noble aspects of her character made a difference in so many lives. This award will recognize her incredible impact and keep her memory alive in perpetuity.