DEVELOPMENTAL DISABILITIES AWARENESS MONTH – Life Side by Side 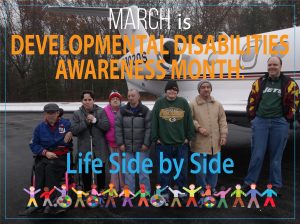 Terry, Laura, Marilyn, Ricky, Bobby, Joey and Michael went to Saratoga County Airport to watch the planes and were treated by a pilot to learn all about his plane and flying!

In 1987, the President’s Committee on People with Intellectual Disabilities established March as a month to recognize the accomplishments, contributions and abilities of individuals with developmental disabilities.

in the U.S. have some sort of disability