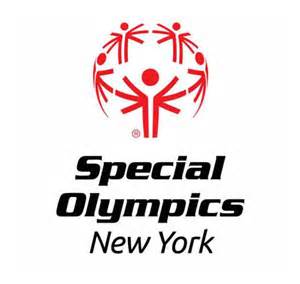 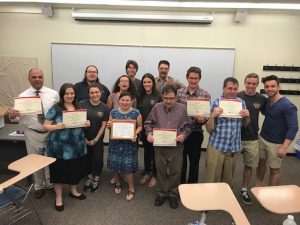 Bob is featured as the 3rd man in the middle of the class!

As the Capital District is hosting the 2017 & 2018 Summer State Games we want to share Robert (Bob) Baker’s journey with you. He may seem very quiet at first glance, but he has a great story to tell.  Bob recently graduated from the 2017 Capital District Athlete Ambassador Class with a group of 9 other athletes.  He is the true depiction of determination as he has overcome bullying, shyness and on April 27th, he stood in front of his peers, the Special Olympics’ Board of Directors and a packed audience to deliver a memorized speech. Bob determination to become an Ambassador and state, “Speak up, have the right attitude, be yourself and never give up” drew cheers and tears!  After spending over a month working with the University of Albany’s ABEL group, these athletes are now equipped with the skills to promote and speak on the behalf of Special Olympics. Bob first became a Special Olympic athlete in 1972.  He quickly worked up to running the mile and claiming a gold medal. He depicts this as the moment he learned that only he could determine his limitations.  Bob has since competed in basketball, softball, Nordic skiing and bowling – all of which have boosted his self-confidence to strive to achieve new goals.  He believes that Special Olympics has encouraged him to be active and hopes to win another medal in bowling at the Summer NYS Games to add to his collection and for his family.