Memorize this question and ask it for each and every email you receive.  Trust nothing.  Be skeptical. 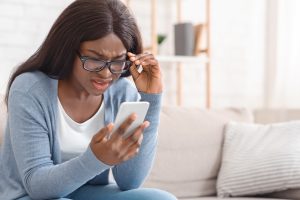 The protected health information we use to do our jobs is valuable, and the consequences for allowing unauthorized access can be very serious.  Phishing is a technique cybercriminals use to lure people to turn over personal, financial, and/or business information to them through email and social media posts with links .  Fortunately, the information security mindset can be learned, and learning to be skeptical will help keep your account secure.  But, you need to know what to look for, so let’s take a look at the variety of phishing techniques these criminals use and examine some examples so you can be on the alert for them.(1)

Types of phishing vary according to the target and bait used:

The bait will be presented in a variety of forms:

Can you spot a scam? 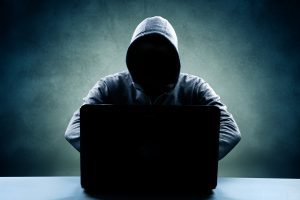 Remember, this variety of scam is called phishing for a reason, and you are the fish.  Scammers will bait you with lures that look remarkably “lifelike”, just as in fishing.  However, armed with information and a good dose of skepticism, you should be in a better position to avoid getting caught.  The question Why this now? is meant as a reminder to pay attention to details of not only who sent you a message, whether the message was expected, but also down to basic issues of grammar, sentence structure, spelling, tone, persuasive techniques,  as well as matters of how graphical elements are presented, e.g., is a company logo “off” in some way?

This example email below has a number of telltale signs something is just not right: 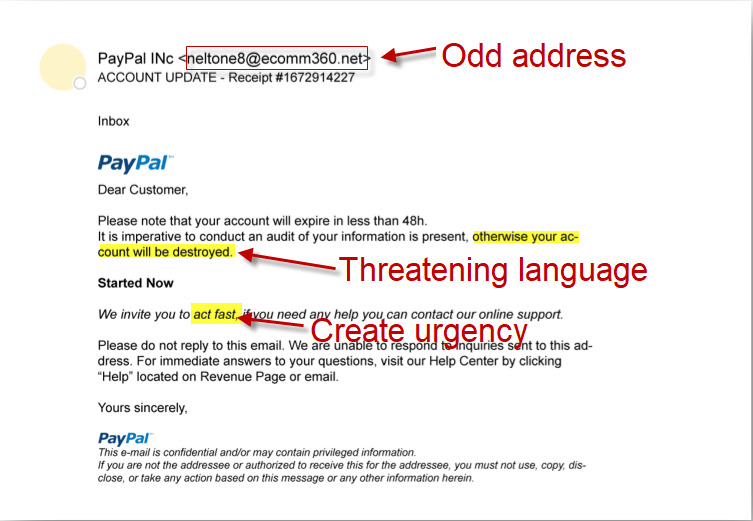 Cybercriminals who do this scam have relatively low overhead costs when compared to other money making enterprises, and they rely on the sheer number of messages they spew out to catch enough of you to make their efforts profitable.  The messages may be crafted by non-Native speakers of English who have an incomplete grasp of the small details native speakers take for granted, so this may lead them to open a message with a greeting that’s too formal or informal, to mis-use or poorly form common abbreviations, and so on.  If you look at the example, your attention should be drawn to the incorrectly formed “INc” in PayPal’s name, and also to the domain @ecomm360 shown in the sender’s field.  Ask yourself, “What does ecomm360 have to do with PayPal?  These two little details alone are reason to pause and give the rest of the message closer examination.

The language used in the message will also provide clues to its legitimacy.  Be on the alert for words an phrases that are meant to scare you or act with haste.  Fear is a core human emotion that served to motivate our hominid ancestors to run away from things that evoked the response.  Unfortunately, this hyperfocus on survival shuts down that part of our brain that is there to say, “Hey.  Is this something we need to fear?  Is this a real threat?”  Cybercriminals crafting these messages rely on this core response when they use inflammatory language or that encouraging to act quickly.  Shutting down careful thought on your part is what they use to trick you into taking the bait.  So, pause, take a deep breath and ask, Why this now?